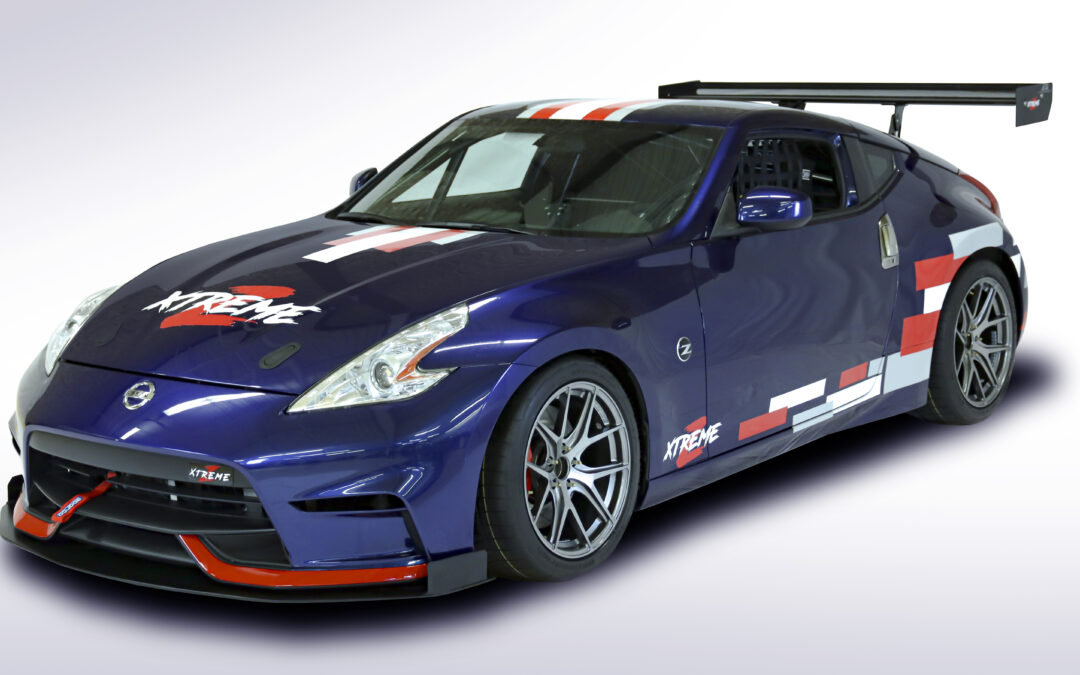 This article was written for Ontario Z Car’s quarterly magazine Zedline. OZC members get exclusive access to the current year issues – past issues are available in our archive.

Xtreme Motorsports is the perfect name for Olivier Bédard’s new racing project. Who else would dream of hosting a stable full of Nissan 370z race cars, and actually make it happen.

If you love racing and you haven’t heard of Olivier – time to do some homework. He may only be 23 – but he already has almost 15 years of very successful racing under his belt. Starting in karts at age 9, he quickly showed massive potential – competing first at the regional levels and then on to national and international ranks. In 2013 Olivier made his first steps into Formula 1600, nurturing more of his race talent. In his peak year he finished runner-up with nine podiums, two wins and no races outside the top 5. If you have ever witnessed the world-class talent in Formula 1600, you know that this is an incredible feat. In 2015 Olivier moved to the newly formed Nissan Micra Cup Series, and basically dominated the field. He reins as the 2015, 2017 and 2018 overall series champion (oh yeah and runner-up champion in 2016). Some of you may remember Olivier as he was the guest driver who came to speak with Ontario Z Car at the Nissan Micra Cup Corral at Canadian Tire Motorsport Park.

In 2020, Olivier started a very new and ambitious journey… one that we are all very excited about.

The Super Production Challenge Series is an “IMSA” inspired, ultra competitive race series that for nine seasons has offered both amateur and semi-professional drivers premium events to compete in across Quebec and Ontario. The championship is based on three classes: Compact – up to 100 hp, Production – up to 220 hp, and Super Production – up to 300 hp. The cars are “production based”. They must be a current make and model offered in Canada within 15 years and the race cars must retain a readily identifiable appearance of their street counterparts. All cars run the BF Goodrich G-Force Rival S tires (BF Goodrich is an official sponsor of the series) and are allowed significant modifications to the suspension, brakes, chassis and engine.

The spirit of the Super Production Challenge Series (SPC) is to create affordable racing. While we are fully aware that the term “affordable” and “racing” are unlikely partners – consider the options. If you’re planning to compete in a GT4 or TCR class, you’re looking at a race car that costs over $200,000. You can build one yourself for cheaper, but this requires a substantial amount of effort and experience to be competitive. Once you’ve got the car, you’re then looking at entry fees, tires, fuel, brake pad/rotors and other consumables for each race weekend you enter. SPC offers lower fees than other similar series and has been smart to choose a “street” tire that has a significantly longer life span than a true racing slick. It’s a good choice for those with access to enough funds to support a racing habit.

A reliable, cost-effective, competitive race experience with an ultra cool car and outstanding race team support is the niche that Olivier hopes to fill with his new venture Xtreme Motorsports. Working closely with his father Robert Bedard and an engineering partnership with former Nissan Cup teammate Alex Habrich, Xtreme Motorsports offers a turnkey Super Production class Nissan 370z in the range of $65,000 to $75,000 or join the team with an arrive and drive program for around $60,000 a season. The huge advantage is that the team has done significant testing and improvements to the platform in 2020 – they’ve ironed out many of the typical new-racecar issues and collected tons of data. They’ve learnt the personality of the 370z on track, they’ve listened, learned, engineered proprietary parts and made specific adjustments. Their knowledge base will feed outstanding reaction and recovery times to issues encountered on race weekends – the most critical service offering of a full support race team. Add that to Olivier, Robert and Alex’s own driving experience of the 370z and the coaching they could offer – it puts Xtreme Motorsports in a very solid position to not only offer an exciting and fulfilling race experience for its customers, but certainly an excellent shot at weekend podiums and a series championship.

A popular question is always – why choose a Nissan 370z as a race car? For Olivier that’s easy. It’s a tried and true production model that’s been around since 2009. While that may seem dated, it means any production bugs are worked out and raw chassis, parts and modifications are readily available and affordable. The design has stood the test of time and the car’s power output and rear-wheel drive capabilities are highly desirable attributes for a race car.

When asked about the handling of the 370z on track – Olivier has raving reviews. He did a lot of testing with the 370z on the track right out of the box. Even without aero and suspension modifications it handles exceptionally well, with just a little oversteer. He comments on how well designed and built the stock components of the 370z are. While Xtreme Motorsports has added a number of modifications including coilovers, aero (wing, splitter, sway bars) and custom brake ducts, Oliver mentions that it was the addition of a limited-slip racing differential that made the biggest difference. Replacing the differential gave the car incredible traction and the confidence a driver needs for more throttle input.

Asking Olivier about what his aspirations and dreams are for Xtreme Motorsports – immediately he responds that their goal is to have up to eight 370z’s on track in SPC this year. (They have 5 confirmed already with a few in the wings… so this is actually not that far out of reach!) You can tell that Olivier and Robert also truly care about the customer experience, wanting to excel at their team service and support offering as well – a refreshing perspective for the race scene. Olivier looks forward to this being his full-time job (an exceptionally bright young man, he graduates with a degree in business this fall). Depending on when the boarders open up and travel is allowed, Xtreme Motorsports would like to explore new series and tracks with the 370z’s, maybe even take on endurance racing – more to the likes of American Endurance Racing and World Racing League – in addition to the 12 race, 5 event schedule of SPC.

And what about the next generation Z car? As a former official Nissan Ambassador and an enthusiast extremely passionate about z cars like us – he loves the look of it and can hardly wait to get his hands it.

OZC hopes to visit with Xtreme Motorsports and their 370z race cars at their Ontario SPC events currently scheduled for May 21-23 at Canadian Tire Motorsport Park and June 25-27 at Shannonville Motorsport Park.  This will all depend on COVID-19 regulations – stay tuned to our OZC event calendar at www.ontariozcar.com

Cannot wait for this years zedfest

Well if you're an OZC member you'll be happy to hear the latest issue of Zedline is out and will be in your inbox soon! Perfect timing for some great weekend reading snuggled up by the fire. Stay warm everyone! ... See MoreSee Less