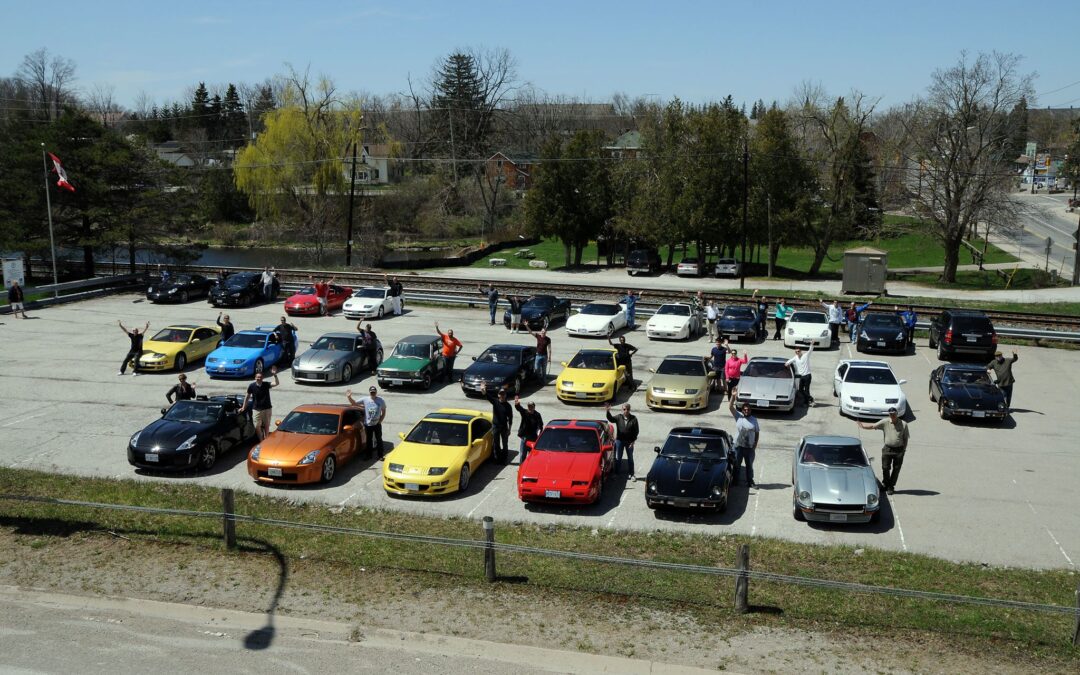 On May 28th, 2017 the Ontario Z Car club hosted its first tour of the season through the hills of the Halton Region.

A few mapping glitches split up the group for a while, but after some re-collection fun was had by all!

As promised lots of curves and excitement. Speaking for everyone many loved King Rd, going up Appleby line (rattlesnake point) and driving through the picturesque areas of Lowville and Cedar springs. Unfortunately for some it proved too much for the cars mechanicals and had no choice but to cut the tour short.

Moving on again we snaked our way through Limerock, Glen Williams, Terra cotta, and had a nice visit at Spirit tree estate cidery /bake shop. By the looks of it we did a pretty good job of clearing them of baked goods. FYI… those butter tarts… delicious!

After a couple small raffle draws off we were again this time with Jason leading the Fast and furious group and I leading the rest of us past The Badlands and The scenic forks of the credit drive.

Approaching Belfountain it was clear this is a driving destination. Anything from custom motorcycles, modified imports, to road hogging, apex missing dodge chargers that nearly ran me off the road. Aside from all the noise though it truly is a beautiful roller coaster ride following the river and the elevation changes of  Caledon Ski resort.

To finish the adventure many of us enjoyed food and drinks at the Busholme Inn restaurant in Erin. Judging by the smiles and amount of left arm sun tans we declare the event a success!

The annual Halton Hills Tour was a huge draw as always being the first cruise of the year; everyone is eager to get together for an afternoon of gallivanting through the rural countryside of Milton, Waterdown and Caledon. The tour was originally slated for May 7 but due to terrible weather was rescheduled for May 28 which turned out to be a much better day with sun, dry roads and 25 degree temperature. The weather was so nice that my left arm got sunburn from hanging out my window all afternoon.

Halton Hills is usually my tour to organize but I didn’t have time this year so thankfully Wes took the lead and did a great job organizing such a big group. We had some 35 cars initially at the starting point – Montana’s in Milton. We lost a handful of cars in the early going but when regrouped at the first stop in Campbellville, we had 20 cars for the photo shoot and then gained a few more later on who found us on route. In total, we had about 25 cars for the duration of the tour.

Unfortunately the Basecamp navigation files were not working proper on any of our Garmin devices, except Erle’s who was in charge of keeping the group together from the back of the pack. Regardless, Wes and I got by with the old fashion Google map printed directions and our familiarity with the route.

The highlight of the day for me was leading the last leg of the tour from Spirit Tree Cidery through Belfountain and two runs along the famous Forks Of The Credit Road. For this last part I had Kim’s cousin Paula with me who was excited to experience the thrill of a spirited drive. For those who kept up with me, we were all smiles at the end of the tour as it provided an exhilarating driving experience in perfect conditions.

The day ended with a small group of us having dinner and drinks at the Bushholme Pub in Erin, a nice way to wrap up the day reflecting on a glorious afternoon of Z-Car camaraderie.

A few thing about this cruise……

Two Random cars joined the cruise…..a mother and son team driving a Miata and then a young couple in an Z3/M3……wagon thingy.  Stayed with us for over an hour…..

Everyone was well behaved and everything went smoothly and safely.

Congrats to Jason and Wes!

Have any comments about this cruise you’d like added to this post?  Feel free to email diane@ontariozcar.com